The old quarter, for example, is nothing less than an open-air museum where you can trace the course of world history. It is just a short stroll from the house where Luther lived in the east of town to the Castle Church, which boasts the famous theses door and the graves of Luther and Philipp Melanchthon. The monuments that you pass along the way include Melanchthon's house, St. Mary's Church with its exceptional Cranach Altar, and the Cranach courtyards.

Visible for miles around, the tower of Castle Church rises 88 metres from the ground as the most prominent landmark in Wittenberg. Rather inconspicuous by comparison is the castle beside it, from whose southern wing another tower extends. The building is closed off on its northern side by the world-famous Castle Church, where Martin Luther nailed his theses to the door on 31 October 1517.

Its current appearance can be attributed to restoration work undertaken between 1883 and 1892. The interior of the church was completely redecorated on the basis of historical drawings and the church tower was also added. Martin Luther and Philipp Melanchthon are both buried there.

St. Mary's parish church first appeared in records in 1187. The current chancel and the southern side aisle were built in 1280 or thereabouts. Between 1412 and 1439, the triple-naved hall replaced the nave and the towers were erected.

St. Mary's Church, as the town, parish and people's church, was where the reformers Martin Luther and Johannes Bugenhagen preached their sermons. The service was held in German for the first time here and Communion distributed among the congregation for the first time 'in both kinds', i.e. with bread and wine.

In 1535, the church also witnessed the first ordinations of Protestant priests, which makes it the mother church of the Reformation. 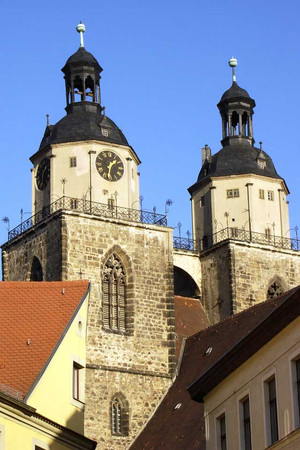