Around 500 Renaissance and late-Gothic style buildings form an architectural ensemble of international standing. Hartenfels Palace, the best preserved early Renaissance palace in Germany, and the magnificent town hall that dominates the market square, are the highlights in an impressive historical townscape.

The Torgau Museum Trail is an excellent way to explore the town on foot and discover history along the way:

The brewery museum chronicles the 500-year history of brewing in Torgau. It even has a medieval brewery cellar hewn into the rock for you to look round. Beer from Torgau was distributed as far as Leipzig, Dresden and Nuremberg, and even Martin Luther was known to enjoy a drop. Hidden behind the understated yet imposing facade of the Mayor Ringenhain House in Breite Strasse are ceiling and wall paintings of the late 16th and early 17th century. These finely crafted works and the interior as a whole make it the most important Renaissance town house in central Germany with regard to art history and culture. It provides an insight into the lives of the wealthy Torgau cloth merchants and of the mayor, Paul Ringenhain, and his family. The jewel in the crown is the Engelsstube (Angels' Room) on the first floor which has a ceiling depicting the heavens with stars, clouds and music-playing angels.

The Katharina Luther Room (Katharinenstrasse 11), the Hausmann Tower and the Palace Lapidarium are also featured on the Torgau Museum Trail. 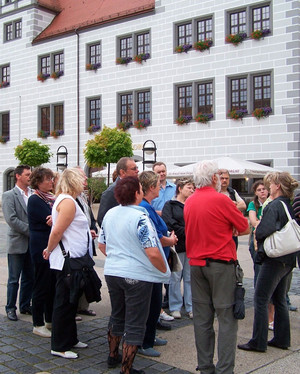 In January 2009, the Municipal and Cultural History Museum Torgau acquired a fabulous new exhibit - an altarpiece of St. Nicholas of Bari that has recently returned to Torgau after an absence of 60 years. Originally part of a triptych in the town's Franciscan Church, it was painted around 1515 in the workshop of Lucas Cranach the Elder (1472-1553).

The priceless panel went missing in the post-war turmoil of 1945, a fate that befell numerous other artworks, before turning up in a Swiss auction house at the end of 2008. It was returned to its rightful home thanks to the rapid and decisive actions of some committed art lovers. Numerous legends tell of the charitable acts and miracles performed by Saint Nicholas, whose reputation for giving gifts is the basis of our modern-day Father Christmas. 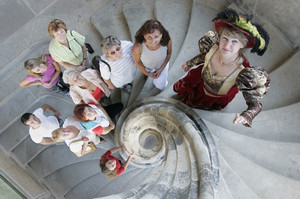 It's hard not to be impressed by the marketplace in Torgau with its Renaissance town hall and ensemble of Renaissance town houses. Torgau is also home to Germany's oldest toy shop (family-owned since 1685) and the oldest pharmacy in the Saxony Electorate, the Mohrenapotheke, which was built in 1503 under electoral charter. The Church of St. Nicholas in the town hall courtyard played host to the first German-language baptism in 1519 and the first German-language sermon the following year. It was secularised soon afterwards, however. 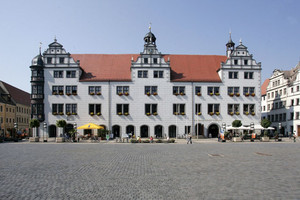 Hartenfels Palace was built in the 15th and 16th centuries in the style of the early German Renaissance. The Grosser Wendelstein, its semi-open spiral staircase, is a prominent feature. Lavish festivals and numerous weddings were celebrated in the most modern residential palace of its day in Saxony. 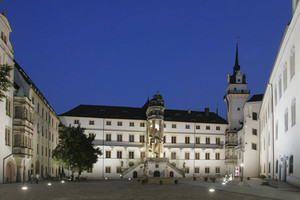