Martin Luther lived on the second floor of this house from 7 to 26 February 1537 during the most important meeting of the Schmalkaldic League. He was the guest of the Hessian chamberlain Balthasar Wilhelm. Luther also preached in Schmalkalden, while his famous Schmalkaldic Articles became the statements of the Lutheran Protestant faith around the world. These achievements are remembered by a stucco panel from 1687 which bears an inscription, the swan (Luther's symbol), and the seals used by Luther and Melanchthon.

Luther's house is the starting point of the Martin Luther walking trail (17km), which follows the route taken by Luther to Tambach-Dietharz in 1537. Luther's apartment itself features an exhibition entitled: "A state founded on faith - Philip the Magnanimous, Landgrave of Hesse 1504-1567". 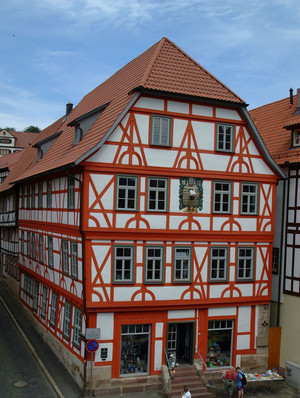